In China and in Chinatowns across the world, Chinese New Year is the biggest and most important festival of the year. Because Chinese months are organized by the lunar calendar, the dates vary year-to-year but always fall between January 21st and February 21st. The celebrations usually last for 15 days, ending on the date of the full moon. The lunar new year also portends the coming of spring, so the holiday is infused with a sense of hope and renewal. The history of Chinese New Year dates back to the 14th century B.C.

Many Chinese people believe that specific actions taken around the New Year portend better outcomes for the year ahead. For example, keeping the lights on all night may scare off the spirits of misfortune, eating sweets ensure a “sweet” year, and housecleaning before New Year’s Day brings good luck in the coming year.

Besides sweets, many savory foods are also believed to bring good fortune. One popular lucky Chinese New Year food is dumplings, which are associated with wealth. According to Chinese folklore, the more dumplings you eat during this time, the more wealth will come your way in the new year. In Chinese, the word for “fish” is similar to the word for “surplus,” so eating fish for the holiday is also believed to lead to prosperity. Eating spring rolls for the holiday is also symbolic of creating wealth in the new year. Dumplings, fish, and spring rolls are also common foods to eat on the first day of the Chinese New Year.

Still want to attract more prosperity? The Chinese words for oranges, tangerines, kumquats, and pomelos all resemble the words for “luck” and “wealth,” so these fruits are also eaten and given in abundance during the lunar new year celebrations.

Sweet rice balls are a lucky Chinese New Year food because they symbolize harmony, unity, and family togetherness. Eating longevity noodles brings happiness and – no surprise – a long life! Many say that the longer the length of the noodles, the more years you will add.

Just as some foods bring good fortune, others bring bad luck. For this reason, it’s a tradition to avoid chicken on Chinese New Year. This is because chickens scratch backward, symbolizing a focus on the past. White is traditionally an unlucky color representing death, so tofu, eggs, and white cheeses are also avoided during the lunar new year festivities.

Born from the Ashes

The concept of a Chinatown with a distinct aesthetic did not develop organically. It evolved through a combination of tragedy, entrepreneurial vision, and some hardcore political maneuvering and it happened 6,000 miles from China.

The tragedy was the 1906 San Francisco earthquake and the fires that burned down the city. The Chinatown neighbourhood looked like any other part of the city, except it was primarily populated by people of Asian descent, many of whom were recent immigrants. The area was also a bit more run-down because of higher poverty rates.

Before 1906, people outside Chinatown mostly avoided the neighbourhood due to racism and the perception that it was a lawless area where gambling, drugs, prostitution, and crime prevailed. In reality, the enclave had about the same crime rate as any other similar American urban area. It was, after all, the home for tens of thousands of immigrants who were poor, working-class, and had not yet learned the language or customs of their new home country.

The wealthy elites of San Francisco sought to use the destruction of the neighbourhood during the earthquake and fire to evict the inhabitants and incorporate the land into their vision of a white-dominated, modern American city. Because the economy of San Francisco was so dependent on trade with China, Chinese entrepreneurs were able to convince city leaders to scrap their plan by threatening to move their port business farther north to Portland or Tacoma.

Then, to address the economic hardships of Chinatown, a businessman named Look Tin Eli hired an architect and engineer to rebuild the neighborhood in a way that would attract rather than repel visitors. The irony is that the architect and engineer had never been to China and they based their designs on pictures of old temples and other ancient Chinese buildings. The new Chinatown was designed to be a tourist attraction in much the same way Disneyland would be built decades later.

San Francisco’s Chinese community and the city itself promoted Chinatown as a family-friendly destination for shopping, eating, and gawking. The strategy was a phenomenal success and changed public perception of the neighbourhood from a place to avoid into a place to visit.

The World’s Many Chinatowns

Word of San Francisco’s success traveled far and wide and was imitated by cities with large Asian populations. Each distinctly blends the local culture with its own perceptions of what a Chinatown should look like. You can find Chinatowns in places as diverse as Johannesburg, South Africa; Havana, Cuba; London, England; Amsterdam, Netherlands; Vancouver, Canada; and Kolkata, India.

This post contains our list of the world’s top 10 Chinatowns in which to celebrate Chinese New Year, but in no particular order. During the lunar new year celebrations, if you’re wondering how to get to Chinatown, consult the local tourist board, guidebooks, do an Internet search, or ask a local.

Whichever Chinatown you choose, use Jayride to search and compare airport transfer options to find the best one for you. You can also use the Jayride website to book a ride between your accommodation and any Chinatown market, Chinatown restaurant, or other local destination you wish to visit.

What to do in Chinatown?

The list of things to do in Chinatown is endless, but here are the ones with the broadest appeal.

Singapore possesses the largest percentage of ethnic Chinese outside China, giving its Chinatown an extensive range of architectural styles, restaurants, shops, and accommodations. Although the core of Singapore’s Chinatown is a bit touristy, the fringes are among the most exciting parts of the city, including famous non-Chinese destinations like the Hindu Sri Mariamman Temple and the Buddha Tooth Relic Temple. Because of Singapore’s ethnic diversity, the New York Times referred to the city’s epic lunar new year celebration as “a multicultural feast” with an impressive festival of lights and street bazaar.

Toronto has no fewer than six Chinatown neighbourhoods. The largest is called Central Chinatown and is packed with restaurants and shops. Besides Toronto’s mouth-watering food scene where you can find Chinese New Year foods in abundance, check out the lion and dragon dances where teams move to the driving beat of drums and cymbals.

Although San Francisco boasts the first designed Chinatown, Manila is home to the oldest traditional Chinatown. Known as Binondo, it was founded in 1594 by Spanish missionaries as a settlement for Chinese Catholics. It is the largest, least touristy and most authentic Chinatown you’ll find anywhere. Highlights of their Chinese New Year include fireworks, dragon dances, and an abundance of traditional Chinese New Year foods.

Paris has two Chinatown districts. Started by Vietnamese immigrants, the Quartier Asiatique is considered the largest Chinatown in Europe and is home to a growing population of Chinese and Indochinese nationals. The second Chinatown is located in Belleville and has a more modern, hipper feel. Chinese New Year in the City of Lights is a spectacle with brightly lit red lanterns, colorful parades, dragon dances, drums, martial arts, firecrackers, and other festivities late into the night. As a food-lover’s paradise, there is no shortage of Chinese New Year food ideas.

Between 10-15% of Peru’s population is of Chinese descent, making it no surprise that the largest Chinese population in Latin America can be found in Lima’s Chinatown. Called Barrio Chino, it’s a bustling place with hundreds of shops and thousands of Asian restaurants. The celebration of the lunar new year is popular in Peru, making Lima an excellent destination for the holiday. A major attraction for Chinese New Year is groups performing the lion dance accompanied by drums, gongs, cymbals, and fireworks. Crowds follow the lion dancers as they jump about to scare any evil spirits lurking about. People attempt to pet the dancers’ masks for good luck.

New York City has two Chinatowns, one in Manhattan and one in Queens. In Manhattan, there are so many things to do in Chinatown, New Yorkers take the concept to skyscraper heights. There is a dizzying array of charming shops and delicious eateries. As a city renowned for its cuisine, there are plenty of food ideas for your Chinese New Year party. As for the lunar new year celebration itself, Chinatown Manhattan offers a parade as only the Big Apple can do, with colorful dancing dragons, martial arts performances, dazzling outfits, floats, dancers, musicians, and more. Before and after the parade, there is a street festival with booths, music, dancing, and more festivities.

The Chinatown in Melbourne is the oldest Chinese settlement in the Western world and the largest in the southern hemisphere. It was initially settled by Chinese immigrants who arrived for the gold rush in the mid-1800s. Since then, Thais, Malaysians, Koreans, Indonesians, and other southeast Asians have settled here. As a result, there is a wide variety of excellent Chinatown restaurants serving delicious, authentic Asian foods. For the Chinese New Year, it’s where you will find one of the largest dragons in the world, requiring 200 people to operate. When the dragon is not on parade, it can be viewed in the Museum of Chinese Australian History. The museum has extensive exhibitions narrating the history of the Chinese immigrant experience in Australia.

The largest Chinatown in Japan is found in Yokohoma. Best known for its food, the brightly colored district boasts an abundance of shops, restaurants, and street stalls featuring Japanese-Chinese food and traditional Chinese food. A notable attraction is the historic Kantei-byo Taoist temple, which is over 150 years old. Their lunar new year festivities include the Lantern Festival with dragons that dance across the night sky.

There aren’t enough superlatives to describe Bangkok’s Chinatown. Among the oldest Chinese immigrant settlements, its sprawling layout is bustling with Chinatown markets, street food vendors, colorful neon signs, and mouth-watering aromas. Its vibrancy must be experienced to be believed. A main attraction is the Wat Traimit, a temple which houses a 5.5 ton Buddha, the largest golden Buddha on Earth. Constructed with 18k gold, its worth is estimated at $250 million. The most important annual event in Bangkok is the opening ceremony of the Chinese New Year, and it is attended by throngs of people, often including the Thai Royal Family. The celebrations that follow are among the most exhilarating anywhere. The streets come alive with dragon dancers, firecrackers, elaborate decorations, street fanfare, banquets, and feasts.

Now that you know more about the lunar new year traditions and celebrations at fun and exciting Chinatowns, plan your vacation! Enjoy the best deals with quality car service companies and use Jayride to book your airport car service and rides to and from these exciting festivities!

How To Avoid Spending Money At The Airport 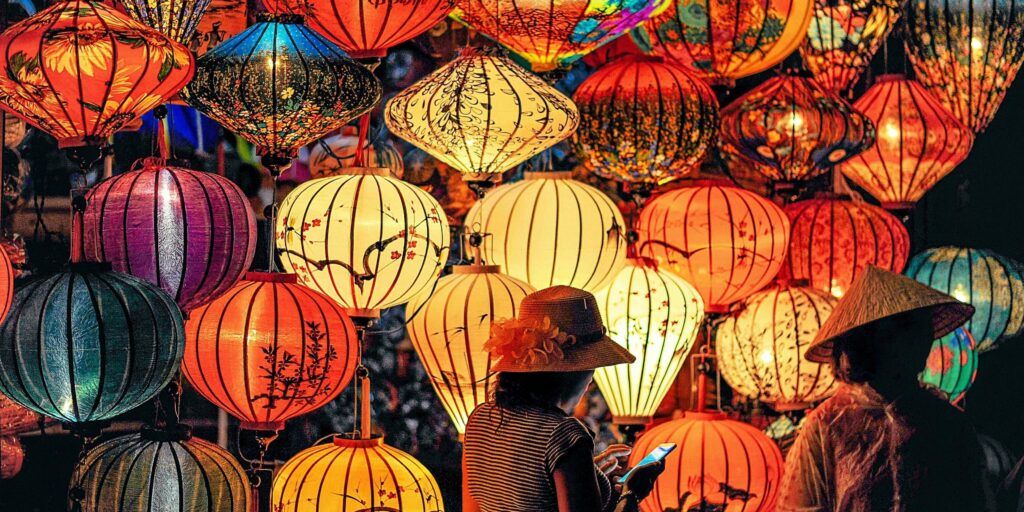